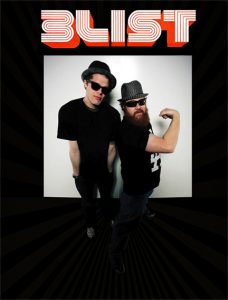 Andy Sparacino (Tron) and Robey Stothart (Sabo Forte) formed BLIST in the summer of 2007. Blist started as a rap duo influenced by old skool hip hop acts like the Beastie Boys who now use live instrumentation to perform rap music. The musicality of Blist is deep-rooted in 70s funk and 80s alternative music with influences ranging from Zapp & Roger to The Pixies. Blist performs with a full band feat. Marvin Kee “the fly” (bass) and Willy Garcia (drums) Blist is a band and not just a ‘rap act’. Their live shows are high energy and always unique. Blist has contributed music to the movies GOON and FUBAR 2. Live show highlights include the Official Grey Cup Afterparty in Edmonton, opening for the RZA as a part of the Sled Island festival as well as opening for the Genius GZA, Public Enemy, Lil Kim, Eyedea&Abilities, Action Bronson, Sweatshop Union, De La Soul and Insane Clown Posse. Their first album BLISM is available through iTunes and are currently working on the their new album which will be released in 2017.